BCS Students Witness the Power of Words in Action 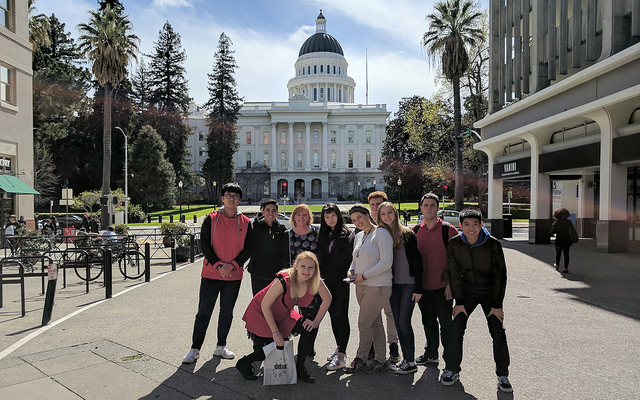 in All School, High School, Uncategorized

How important are public speaking skills in the work place? Bradshaw Christian High School students got the opportunity to see how communication skills make an impact within California government when they attended a state assembly session on March 19. Our Public Speaking students traveled to the California Capitol to observe legislators and lobbyists in action. Students used their evaluative and listening skills to assess the role of communication in the state legislative process.

After a tour of the capital building, students began their observations even before the assembly meeting came to order. Students quickly noticed which members were attempting to win over other legislators on the floor by the body language they were using as they met one another. Some were clearly working to try and gain support, while others were very closed off and seemed determined to stick to their own opinion or agenda.

As the session began, BCS students were recognized by Assemblyman Jim Cooper from the assembly floor. Students noted which speakers engaged the support of other members both on the floor and in the gallery audience through their preparation and conviction. While nearly all the bills presented were passed without dissent, one resolution received both overwhelming support and vehement opposition. The visit illustrated how communication skills can be either a detriment or tremendous asset in the public arena. Hearing passionate, well-prepared speakers rallying for their causes inspired the students to dive into their upcoming speech project with increased enthusiasm. Our students incorporated what they learned into the Voices Project, a two-week chapel presentation in which each student presented a speech featuring the powerful stories of people who refused to let their voices be silenced and made a phenomenal impact on the world.